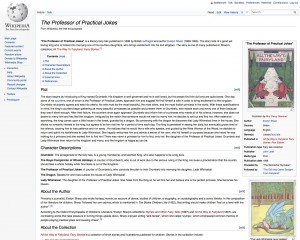 The Professor of Practical Jokes

I brought the essay stack from Studies in Children’s Literature into the office with me.  I want it to look at me reproachfully, as I ought to be marking.

My Children’s Lit students have, in effect, written two papers for the class.  The stack represents the second and more traditional analytic essay of the two.  The first was a collaborative summative paper, or rather, a Wikipedia article about a fin-de-siècle literary fairy tale.  The students had to analyze three wikipedia pages, and recommend scholarly best practices, which I boiled down into a rubric for their final wikipedia articles (hat tip to Laura Estill for the idea).

Each student worked with a partner on the encoding, research, and proofreading for their article. We had long discussions about the culture of Wikipedia, as Wikipedians are less hospitable and more territorial than users of other social media spaces, and followed the #TooFew editathon.  The students had work together to learn how to handle criticism, deletions, and commentary that might seem unjust or unfair (a life skill if ever I met one).  Some of their articles were accepted by the broader Wikipedia community, others rejected.  The articles were a huge amount of work.  The students have let me know that now that they’ve run the gauntlet, they are more wary about information on Wikipedia but but have real respect for the amount of work that the encyclopedia represents.

I wonder if I can replace the final essay with a Wikipedia article next year? On the whole the students engaged in more thorough research and better proofreading than they tend to when I am the sole audience for their work, but Wikipedia articles don’t allow for original arguments about the meaning of the text — the central feature of the final essay.

Now it is time for me to set the Children’s Literature exam.  Unfortunately, I won’t be able to incorporate their new knowledge about Wikipedia into the pen-to-paper exam: “Choose one of the following two terms and discuss how it …”