So this will be my last post of the day. I just had a marathon run of meetings starting at 6:30 and ending just a few minutes ago and am just now trying to get all of the notes and announcements into a some what presentable order (an impossibility I assure you). 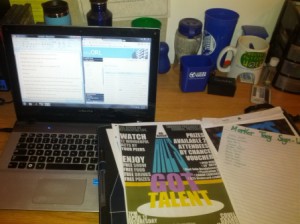 Three tabs, two windows, a folder full of flyers and love in my heart (I swear).

As you can tell there’s a theme going on here. Yes, I basically live on my computer (not by choice). Most of anything that I have to do needs to be done on the computer and thus an unlikely (ok likely) friendship has been struck between me and the technological beast. But anyways, we were talking about my meetings. First, I attended my building’s association meeting: a meeting at which a group of residents gathers together to decide how to allocate the buildings budget for different types of programs and events that will benefit all the residents of the building.

Then I had staff meting from 7:30 until 9. At Resident Assistant meetings we talk about programming opportunities that we have and different incidents and events happening throughout the week that could affect our residents and our own lives as we encounter them. Specifically we discussed ways in which to program and support Enough Is Enough Week and Ally Week. These two awareness weeks will effect not only my building but also the entire campus in major ways. Enough Is Enough deals with domestic abuse, bullying, and sexual assault and the impact each can have on individuals throughout their life. Considering the numerous cases of sexual assault, hate incidents, and the overall campus climate, this program will be immensely important in terms of its execution. Ally Week deals with issues within the LGBT community and specifically addresses the issue of what it means to be an “ally.” For the same reasons mentioned above, I believe this program will have a drastic impact on the campus.

We also discussed ways in which to engage with Bruin Day, the university’s admit weekend. Specifically, we discuss how we as leaders can help fully engage and welcome the new generation of Bruins and how we can specifically address their needs while they are on campus for the weekend.

I then had to facilitate a floor meeting in order to update my residents on different programs and events that they may wish to attend throughout the upcoming weeks. I also helped facilitate conversation about programs that they wanted to see happen and how we could possibly make those programs a reality in terms of planning and implementation. Currently, I’m ending my night the way any average warm blooded American would end their night: scheduling meetings, blogging, reading, and posting announcements (now that I think about it, I don’t think I’m very average…).

Well that’s my day. Not very interesting, but, hey, I like it. Hope you enjoyed it. Until next time…

The next part of my day was taken up by my very last English class in college. Being a graduating English major, that’s quite an accomplishment. This class’ topic is based on California literature starting with the late 19th Century. Pretty interesting right? Thanks for humoring me. 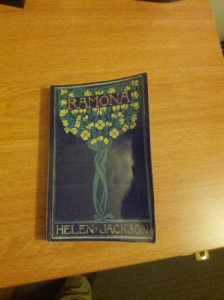 Not a bad read. Definitely worth the read.

Anyways, we discussed Ramona and the social implications such a novel might have/still has on modern society in the 21st Century. Most of the discussion consisted of ways in which American society has integrated the “good” parts of Native Californian and Mexican culture and rejected the “bad” parts. Examples included Mission style architecture found in many Californian housing tracts, our cultural obsession with finding “authentic” Mexican food, and the transformation of traditionally Mexican celebrations into modes of partying and drinking by American society. In the end, we came to the conclusion that these forms of social integration, while displaying a sort of Utopian narrative of diversity and cultural acceptance, also represents a more dystopian narrative in which the cultural uniqueness of the native Californian people has been subjugated by the social majority of American society.

After class, I began to prepare for my night of meetings. This should be fun…

As you can see, I have two laptops open. That makes me twice as important…

I’m at work, which mostly has me emailing residents about meetings with the Resident Director and setting up for a big program tomorrow that allows residents to mingle with graduate students and alumni.  Most of it’s done, so I’m just trying to finish up some school work before class later today.  Currently, I’m reading a novel entitled Ramona which is romantic tale of a young Mexican girl during the declining Mission Period of the State of California. According to my professor, it was meant to make aware the plight of the Native Americans in the area like Uncle Tom’s Cabin did for the slave population in the American south. The book has been very engaging, and I’m glad I had the opportunity to read it. I don’t have much else scheduled for the day, except to finish my blogging which I was only able to begin earlier today. I still have about 2 blog posts left today regarding my capstone class and internship.

So I woke up pretty late this morning, but don’t worry! I have an excuse. A Disneyland excuse to be precise. We were at the park until almost closing last night. My entire body was exhausted, and I could still feel it this morning. But here I am now: up and ready to take on Day of DH! 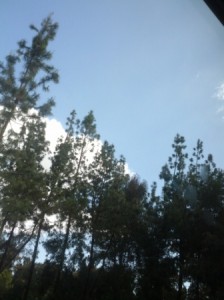 The one good thing about waking up a little later is that I can wake up to a view like this outside my window. It’s like living in a small slice of paradise. To wake up to this with the window open and the birds chirping every morning, makes it more than worth it to stop hitting the snooz button. The sad thing is that I only get to enjoy this amazing little piece of heave-on-earth for just another couple of months until I graduate (*tears*). But I shall enjoy it while it lasts.

So waking up wasn’t so hard, but here’s the bad thing about waking up that they never tell you. When you get up, you actually have to start doing stuff. And therein lies the problem that I ran into this morning. If I want to get up enjoy the beauty around me, I actually have to start productivity. But I’ll also give you a little secret to this dilemma that some of you may face as well. A good shower will almost always get you in the mood to start the day. Cleanliness is next to godliness (or in this case just someone who’s not lazy).

Now that I’ve woken up and gotten showered and cleaned, it’s probably about time that I get to work with my day. I have a full day of homework, blogging, work, and meetings that I have to get through, and it won’t end until about 10pm tonight. First, I’m going to get some homework for my classes this week done (A few blog posts, some reading for my English class and my internship, etc). At 11:30, I have work as an Office Assistant in the Office of Residential Life. After that, I’ll probably keep working on my homework until my English class at 4. At 6, my night of meetings start and will probably end at around 10pm. Let this be a lesson to you all, if you want to be a resident assistant at UCLA, prepare to lose your Monday nights. THEY DO NOT EXIST! 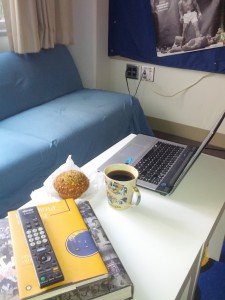 Laptop? Check. Muffin? Check. Coffee? Only enough to satisfy my minimum requirements, so check minus!

Welcome to Day of DH 2013. This is your first post. Edit or delete it, then start blogging!