I arrived as usual at King’s Manor, York: the home of the Archaeology Data Service. 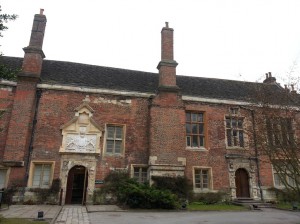 Then having made a necessary cup of tea (I won’t tell you about all of those!) I sat down to start my emails… not many for a Monday morning. The main one of note being a query about uploading grey literature reports via the OASIS form.

Next… on to my main task for the day, working on the archive for a fieldwalking survey which took place in Cornwall between 2004 and 2010 and turned up over 5000 identifiable items, mostly flints. I started looking at this archive a week or so ago, so I have already devised a preservation strategy. Today’s task was to do the preservation file migrations and upload the files to the preservation file server, which for 5000 large TIFs takes over 5 hours!

So what file migrations did I have to do? I turned the delivered files into preservation and dissemination copies as set out in our various procedural documents. The ADS always creates different formats for preservation and dissemination as formats suitable for long term storage are not necessarily the best formats for general use now, and vice versa.

These migrations are recorded in our Collections Management System (CMS) as process metadata.

We also record metadata for the project as a whole. This is extended Dublin Core and is again stored in the CMS. This information is used for resource discovery through our website in ArchSearch and the Archives section as well as being harvested and used on other websites.

Next I needed to create a way for users to search through the record sheets and identify which to view. A list of 3500+ sheets would not be much use. So I turned one of the spreadsheets into a database table and created a search using this. This is the issue I had looked at previously as the spreadsheet did not contain the name of the images and they needed to be linked together using external data. One sentence for a rather complicated task, but worth it though to create a usable interface.

Looking forward to the Day if Digital Humanities. I’m hoping to get a good bit of digital archiving done!