Such fun to get the notification about so many comments for me to approve and display — and so funny to see that they’re all spam generated by bots. But I’ll go to look at some posts by other Day of DH-ers and make some real comments for them to enjoy. Ciao!

The best part about being a mature student is that 11:00pm is a late night for me. I’ve watched a rerun of Gilmore Girls and outlined the short novel one of my editors asked for as a sequel to my book Tower in the Crooked Wood. My partner has just finished the library book that’s due tomorrow, so it’s time to log off. 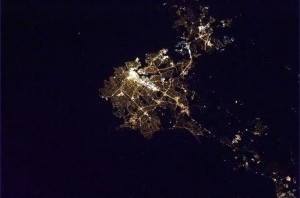 Tomorrow I’ll have to be up early if I want to get on the water in my kayak before visiting my Dad in the morning — Tuesday is my Mom’s golf day so she doesn’t see him till late in the afternoon. Gotta attend the oral defense of my study buddy, and meet my partner in the Graduate Students House for a sandwich and watching our assigned videos before TAing at the community extension class University 201. Another busy day!

I’m set up for the evening, writing in my home office. That’s a euphemism for sitting up on the foot of my bed, leaning against the post, with a sleeping bag over my legs and a computer on my lap. I used to write at my desk, but it’s stacked shoulder-high with books and the chair has my still-damp life jacket on it. You can’t leave stacks of books on a bed and still have somewhere to sleep. It’s a lot warmer to wrap up snugly, turn on channel 20 for the CBC and BBC news, and write. 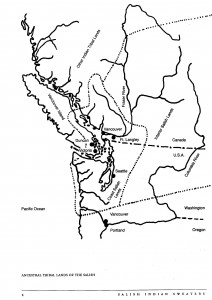 Tonight I’m editing the part of my master’s essay that I’ll read aloud for my oral defense in two weeks. I scanned the perfect illustration from a book to use for my powerpoint — it’s a simple line drawing of a stylized map. Later I’ll write a post for my paddle group’s blog, and since I saw a river otter this morning I’ll illustrate it with a photo taken by my friend John along that shore.

After cooking lunch for 80 people, my partner is making dinner at my parents’ condo. I can’t set the table yet because Mom is using it to sort the week’s mail with my cousin’s help. Monday dinners this winter have been a regular thing: cousin and Mom do housekeeping, Bernie cooks dinner, I tear in just in time to set the table.

Here’s where I want to be, right at 4pm — in the University Club at the Nuts and Bolts meeting with the ETCL! 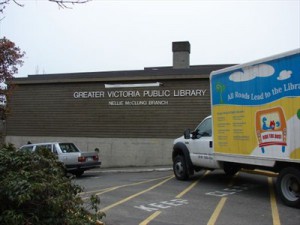 I can’t put off a trip to the library — not the UVic Library, but the nearest branch of the Greater Victoria Public Library http://gvpl.ca/ . I have overdue books to return, and two more to pick up that are waiting for me at the front counter.

This library is pretty much my non-home office, because their computers have access to journals and databases not available to my home computer. Also, their collection has books necessary for researching my MA master’s essay — books that aren’t available at UVic. The search engine on the public library’s website works better for finding books in the collection than the search engine on UVic’s library website.

After editing the powerpoint file for my oral defense coming up, I walked over to the nursing home where my Dad is living. This is a small hospital for long-term care, located half-way between campus and my parents’ home. Chatting with Dad means listening carefully; he has to concentrate to form words clearly. I printed out an online newspaper article to read to Dad, who is legally blind. He owns a magnifying viewer much like a microfiche reader, but one of the nurses says the contraption is too big for his shared room, so it’s at home till the nursing home finds a good place for it. Dad and I like to sit outside in the sheltered garden where there are flowers blooming and purple finches singing. 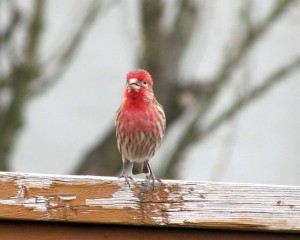 Since Dad’s strokes in November, my Mom visits him every day. She helps him practise his range of motion exercises, and mouth exercises, using a photocopied binder of instructions given to her by a speech therapist in November. Last week, a swallowing pathologist read Dad’s medical test results from CAT scans & barium X-rays, felt Dad’s muscles to assess his partial recovery, and praised all their daily hard work. Dad can now eat a little pureed food to supplement his feeding tube, an amazing thing because scans showed Dad had damage to both sides of the brain in Broca’s area controlling swallowing & speech.

The McPherson Library at UVic is one of my favourite spots on campus! The trees outside turn bright yellow and red in the fall. This is where I do some of my online research and editing of projects I’m writing. Sure, I have a laptop computer of my own — but I don’t have a scanner, a printer, or a screen any bigger than a paperback novel by J.D. Robb. The library also has one of the most popular coffee spots on campus, the BiblioCafe. 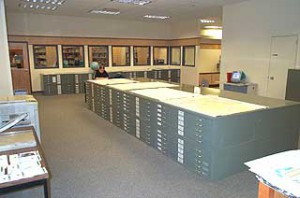 Before the Day of DH, I cross-posted here a note from my kayaking blog about using more than just Google Maps to plan trips and navigate. Here’s one of the most useful places in UVic’s main library — the Maps section! I’ve found historical maps here for Victoria and Toronto that I’ve used when writing fiction, maps of the East European town where my grandfather was born, and topographical maps for planning my kayaking trips to Red Deer, AB and Quadra Island, BC http://kayakyak.blogspot.ca/2011/08/waiatt-bay-quadra-island.html .

On mornings when I don’t have to head away to a meeting or class, I work for at least an hour on one of my writing projects. Today it was a post for my science writers’ blog.

When I’m writing for a website, often I want to add an image. Usually pictures help to convey a theme, or photos give information that would take hundreds of words to explain, and drawings can be really cool. This can be a problem when there isn’t an image already available, either because I have no budget to acquire copyright images, or I left my digital camera at home, or because my drawing ability hasn’t progressed much beyond crayoning in kindergarten.

So I’ve made some images that I can use on simple websites, or as placeholders for where I’ll put a more appropriate image. I used a program called Paint first, and later tried using Photoshop. It’s easier than I thought to take a photograph with strong contrast and do some changes to make an image rather like a black-and-white drawing. Other people I know use photos of their pets as placeholders, but I prefer the images I’ve made from photos my friends took of birds or me in a kayak. Working with Paint is so different from writing or coding that it is as refreshing for my mind as playing a game or checking my e-mail inbox.

Message:Hi, this is Paula out with my kayak. Everything is fine. No worries, eh?