My lack of the will to choose does not apply, however, to places to live. Say what you will about a life that involves more fresh seafood, I still maintain that Chicago is my favorite US city. My colleagues and students at the Institute of Design are great; the city itself is amazing; and everyone works all the time. Plus my roommates are not only tolerant of my enthusiasms, but are in fact downright encouraging. 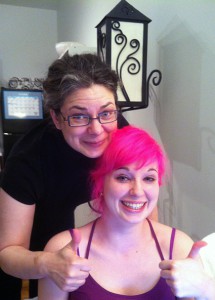 Susan and her daughter Marley being encouraging

Over the past 24 hours, I’ve eaten more varieties of raw oysters than I can remember, slathered in several different concoctions that I spooned lovingly and minutely onto them. I had no idea that oysters even came in species, let alone that you could purchase them individually and they would be described like wines, with, for example, a robust meatiness, not too briny, and a cucumber aftertaste. That was one that I didn’t try, but I did run the gauntlet of least briny to most briny. They were definitely not the same, but I can’t say I chose a favorite—they were all fantastic. 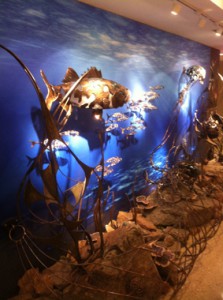 In the Boston airport, K section. By Chris Williams.

One of our discussion topics today in Boston focused on the question of the names of disciplines, how they change over time, and what they tend to imply, both for people working in the area and for others. If I can be permitted a couple of generalizations, from the computer scientists, “digital” suggests “digitization” rather than computation, and for the humanists, “computation” implies crunching the numbers to get an answer, which is not really the humanities project. So I proposed that we consider “computational hermeneutics”, which for all I know is something people have been saying for years, but we all seemed to agree that it would be equally offensive to everyone involved.

Just because you are on the road does not mean that you can neglect your responsibilities back home, and one of mine today is to begin preparing for a PhD defense in a couple of weeks. The students is Eric Swanson, and his dissertation proposes “The Conceptual Scenario Framework for Representing Subjective Experience.” I don’t know, of course, whether or not that title is as compelling for you as it is for me, but all I can say is that I’ve been waiting for some work like this to come out of the design research community for some time. It is also true that thesis and dissertation defenses are among the favorite parts of my job, since I get to ask questions to someone who has spent several years thinking closely about a topic.

There is a lot going on in archeology, but widespread sharing of digital data combined with a toolset designed for algorithmic criticism is still on the horizon. Andrea is one of those people who has her eyes fixed on that point. I was impressed with the work they’ve done to date, and look forward to seeing what comes next. Her hope is that it will involve a great many more people from a wide range of disciplines (e.g. history, economics, sociology) using archeological data as evidence for their research ideas.

Also in attendance was my senior colleague and PhD student Milena Radzikowska, who took a day out of this term’s ridiculously heavy teaching schedule to join the discussion. Her current work is on the ways in which feminist principles can inform interface design for multimodal industry, which has already flustered not a few full professors, but which Andrea seemed to take in stride.

One of the people was our DH pal Vika Zafrin, who is now in the library at Boston University, and is part of a nascent local group of digital humanists as well as people we might expect to become digital humanists soon. Vika fixed me with a glittering eye on the subject of XML markup vs the index, which she rightly identified as a category error, since the former is a technology and the latter something else. I proposed that she attend the upcoming talk in Nebraska by Susan Brown and her team to hear how better minds than mine have been examining this area.

I met Dr. Berlin from Boston University virtually in February this year, when she wrote out of the blue to say some nice things about the paper that Stefan, Milena, and I had published in a recent MLA collection. She holds a research chair in archeology, and works particularly in pottery of the Levant. The topic of our paper was interactive visualization in the humanities, but nonetheless, she felt that her research team might find it interesting if we could come to Boston and spend a day talking with them. The result was a lovely visit to a city that I’ve never been to before but would love to see again. I also met a roomful of people, some of whom I have admired for a long time, and some of whom I have only now learned to admire.

It is beginning to seem to me that whenever the Day of DH rolls around, I am in travel mode, and this year is no exception. I wonder if it is somehow skewing the collective data, so that DH travel seems, at least for some of us, to be the order of the day, when in fact I am at my desk more often than not. This year’s trip was to Boston.